The Gear of Theta Tau – Past & Present – and now archived online 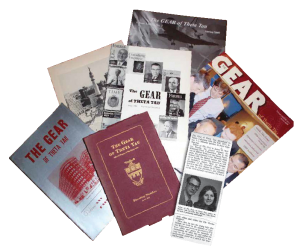 The Central Office worked with Archeios and JAM Graphics of Noblesville, Indiana, to create an online repository of Theta Tau’s history.  The largest element of this project is our magazine, and we are pleased to make it available now.  The article re-printed from the Fall 2013 issue of The Gear below provides a brief history of our magazine, and its editors.

The Fraternity’s magazine began as an annual Chronicle of the Fraternity in General titled “Hammer and Tongs.”  Published under the direction of Beta Chapter at Michigan Tech, the first issue was edited by Herman Hopkins, MTU (Beta) ’08.  In 1909, the magazine was first titled “The Gear.”  Over the decades, the magazine page size changed to accommodate different printing presses.  We are very grateful to all those fine Brothers who have served as Editor in the last 100+ years: